How does hail form? Do they appear in the monsoon rains? | What? Why? How? 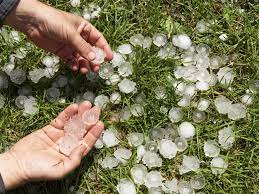 How does hail form? Do they appear in the monsoon rains?

Hail usually falls during storms. In summer, seawater evaporates into clouds due to the sun. The temperature in the rotating atmosphere is about zero degrees Celsius. The temperature in the upper region is still minus degrees. Fast-moving hurricanes at such times push clouds into the upper layer of the atmosphere. The temperature there is so low that water droplets in the clouds freeze and turn into hail. They gradually increase their load by merging the surrounding water droplets and micro-ice droplets. Eventually, when the gravitational force acting on them exceeds the wind resistance, they spontaneously fall to the ground.

During the monsoon season, the Earth's atmosphere does not have much temperature difference, so hailstones do not form as water vapor in the clouds at low altitudes.