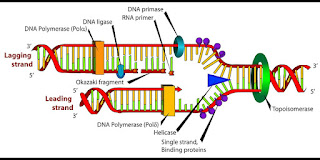 The synthesis of DNA takes place during cell division.. based on situation, next to arrive trascription(RNA formation) and Translation (protein synthesis)

The main aspect hear how the synthesis of DNA takes place and what are te enzymes withstand.

During cell division The bonding between two strands of DNA started to separate with help of helicaze Enzyme...the breaking of bonds controlled by enzyme Gyraze for won't come preposition..after the separation any one of the stand Comes under the enzyme DNA polymerase 3 which cause to the new generation standard of DNA ...the segments of new DNA consider as okazaki segments..

° sudden changes in DNA Caused by mutations,(replacement of Gene's position)

In 2016 one of the California researchers in men chromosome XY ,through cloning we made both Male and female babies by separating XY Chromosomes by one or 2 cells in men..

°Through genetic material we detect person identity,nature and behavior with advance approach

°exceptional cases through the result of environmental conditions certain changes occurs In human DNA t leads to either positive changes or Negative.

°Genetic material present in nucleus...it varies both eukaryotes and prokaryotes having nuclear membrane in eukaryotes only.