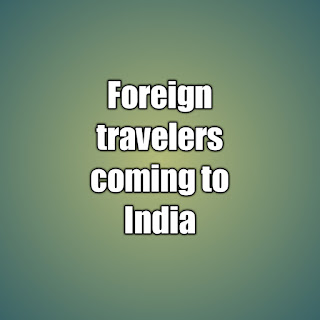 * Atlami - * Talmi, the author of the book 'Geography of India', visited India in the second century.

* Megasthenes - * It was the ambassador of a Greek ruler, Salycus Nicator, who lived in 302 BC.  Chandragupta came to the court of Maurya.  It remained in the court of Chandragupta Maurya for 6 years and wrote a book called 'Indica'.  This book provides information about the culture, society and Indian history of the Mauryan era.

* Adimecus - * It came in the court of Bindusara.  Dimecus was the ambassador of the Syrian king Antiochus.  The description made by it belongs to the Maurya Empire.

* Adonisius - * It was the Greek ambassador who came to the court of Emperor Ashoka.  It was sent as messenger by the King of Egypt, Talmy Philadelphia.

* Afahian - * This was a Chinese traveler who came to India in 405 AD during the reign of Chandragupta II in the Gupta Empire and stayed in India till 411 AD.  Its original purpose was to get information about Indian Buddhist texts.  It has described the people of Madhya Pradesh as happy and prosperous in its description.

* Ahuensang - * It was also a Chinese traveler who came to India during the reign of Harshavardhana.  He lived in India from 630 AD to 643 AD and studied at Nalanda University for 6 years.  The travelogue of Huanseong is also known as Si-Ru-Ki. Its description mentions the society, religion and politics of Harshavardhana's period.

* Samyugan - * This was a Chinese traveler who came to India in 518 AD.  It collected copies related to Buddhism in its travels.

* त्सtsing - * This Chinese traveler traveled to India in the 7th century.  It has described Nalanda University and Vikramashila University.

कोMarkopolo - It came to India at the end of 13th century.  It was a traveler from Venice who came to the court of the Panday king.

Ibn Batuta - This African traveler came to India at the time of Muhammad Tughlaq. He was appointed as the Chief Qazi by Muhammad Tughluq and sent to China as ambassador.  'Rahela' has been composed by Ibn Batuta, which gives information about the rule of Feroze Tughlaq.

Alamsoodi - This Arabic traveler came to India during the reign of Pratihara ruler Mahipal I.  A text called 'Mahajul Jabah' was written by it.

Abdul Razzaq - This Iranian traveler came to India during the rule of Devaraya II, the ruler of Vijayanagara.

Peter Mandi - It was a traveler from Europe who came to India during the reign of Jahangir.

बोBarbossa - It came to India in 1560 AD when the ruler of Vijayanagara was Krishnadevaraya.

Anikola Manuki - This was a traveler from Venice who came to Aurangzeb's court.  It wrote a treatise called 'Storio de Mogor' which describes the Mughal Empire.

* Abelangander de Lispine - * It was a French soldier who reached India with the Marine Fleet in 1672 AD.  It contributed significantly to the establishment of the city of Pondicherry.

* Jean Baptiste Tavernier - * It came to India during the reign of Shah Jahan.  Through this, information about India's famous diamond 'Kohinoor' has been given.

* Captain Hakigs - * It lived in India from 1608 AD to 1613 AD.  It came to India at the time of Jahangir and tried to get the facility for the East India Company.  He was knowledgeable of Persian language.  Through this, information about Jahangir's court decoration and life of Jahangir is obtained.

* Asar Thomas Row - * It came in the court of Jahangir in 1616 AD.  It attempted to obtain trading facility for the East India Company from Jahangir.

Auburnier - This was a French doctor who came to India in 1556 AD.  It describes the reign of Shah Jahan and Aurangzeb.  Its journey is described in 'Travels in the Mughal Empire' which was published in 1670 AD.

* Hamilton - * This was a surgeon who came to India as a member of the East India Company's delegation during the rule of Farukhasiyar.
Join 🔜 @MEP199919